Veezoo was founded with the mission to make access to information as easy as just asking for it. Traditional Business Intelligence (BI) solutions have recently decided to take a similar approach, so we are now taking a look at how they compare with Veezoo. The publication of the article “Computing Machinery and Intelligence” by Alan Turing in 1950 can be considered as laying the foundation of the idea of Natural Language Processing. It was not until the 1970s however that Edgar Frank Codd  introduced the concept of a relational database leading to “Rendezvous”, one of the first Natural Language Interfaces to a Database (NLIDB) – or NLQ, how we call them today. We have previously written a tribute to Edgar and his work and how this led to the development of SEQUEL (Structured English Query Language), later turning to SQL, with the dream of bringing access to information to the “non-trained computer specialist”, the “casual user”. One of the first systems in the field was the The Lunar Sciences Natural Language Information System developed by William Woods in 1972, which allowed geologists to ask questions like ‘What is the average concentration of aluminum in high alkali rocks?’. In those early days, natural language interfaces were built with a specific database and a specific language in mind.

This led to most research in the mid-eighties focusing on making the technology more generic and broad based – leading to technologies such as CHAT-80 written entirely in Prolog and mostly based on manually written rules (check it out on Github). The expectation of the technology was huge and around the late 1980s probably peaked on the hype cycle. It did not take very long for these inflated expectations to come crashing down to the realization of the maturity of the technology and its dependence on a lot of manual work, especially as many well known ventures started to abandon or merge efforts such as the IBM LanguageAccess product or the Microsoft English Query system.

However there were some successes, one of them being ELF, which was built on top of Microsoft Access. It was one of the best systems at the time and old versions are even still available for purchase today. Also, it has a great mascot. Take a look at this fella: 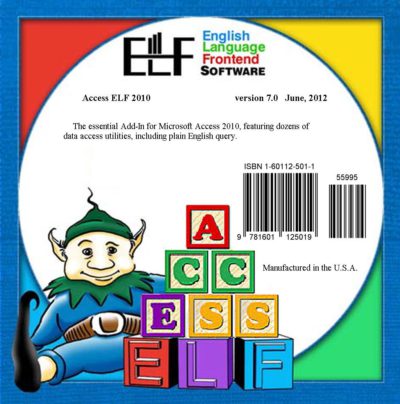 The Natural Language BI Solutions of the 21st Century

With the Web, the explosion of available data and the revolution in processing power and storage, the field of machine learning experienced a renaissance. New AI systems were developed based on examples instead of hand-written rules. This led to a new approach to NLIDBs. With Venture Capital really starting to flow into various new technologies and companies, Natural Language BI solutions came onto the market once again. One of them, Thoughtspot was founded by Ajeet Singh and Amit Prakash in 2012 and raised over $650M to date, giving the company a $4.2 Billion valuation during its last funding round. Another company called Arimo focused on a NLP search UI, founded also in 2012, had raised $13M at the time and was purchased by Panasonic for an undisclosed sum in 2017. Other notable companies such as Tableau, Power BI and Qlik did not develop their Business Intelligence technology with Natural Language in mind, but decided to try and introduce some form of Natural Language Query Interfaces after realizing that the market was requesting such features.

In early 2015 a group of students from ETH Zurich took part in a 24-hour Hackathon and came up with the initial idea for Veezoo: to answer questions asked in natural language automatically with data visualisations. They realized that traditional Business Intelligence solutions were surprisingly dumb and difficult to use, and that in the future, people will inevitably want to get the information that they need by simply asking an intelligent system. This was the birth of Veezoo.

Two years later, they published a paper achieving the world’s highest accuracy in question and answering systems using machine learning, giving them the confidence that they could build an intelligent system better than anything out there in the market. So they raised capital and doubled down on it.

Since then, Veezoo has become a truly intelligent and user-centric self-service analytics system that speaks your language and provides a super easy and fun way of exploring data, making even the most non-technical users able to carry out analytical work to help decision making.

Over the years new Natural Language solutions have come onto the market and in the last few months we have taken a closer look at a few of the different Natural Language Interfaces available and compared the performances. When it was possible, we connected a sample dataset and compared the same questions in the different tools. We documented our tests in a series of videos to give transparency of the achieved results.

Microsoft released its first version of Power BI in 2011. Partnerships with external companies such as Narrative Science were announced to allow the users to have also Natural Language Generation (NLG) capabilities, to automatically create stories and narratives out of data sources. In 2015 Power BI introduced basic natural language querying (NLQ) capabilities and we tested this feature in late 2021 to see how it compares with Veezoo.

Like most tools, Power BI can answer a number of simple questions – offers autocomplete, underlines words to show the user if it understands the concepts and offers different visualizations. Where the tools struggle is when it comes to comparison questions such as when asking: How do Sales of 2020 compare with Sales of 2021? Or when using negations, such as “Show me all customers with no order in last month”, and with questions such as “Show me all customers who purchased furniture as well as office supplies”, which would involve SQL subqueries. We also saw that Power BI seems to not be able to understand questions about age when presented with data about birthdates.

Tableau was founded by Christian Chabot, Chris Stolte, Andrew Beers and Pat Hanrahanin in 2003. It raised over $45 million in venture capital and went public in 2013 raising another $250 million. In 2019 it was bought by Salesforce for $15.7 billion. In 2018 Tableau first unveiled its Natural Language feature called Tableau Ask Data with the aim of letting people ask questions in a conversational manner to make it easier for more people to engage with data and produce analytical insights. When we tested the Tableau Ask data feature, we noticed that just like with Power BI the tool seems to struggle when it comes to comparison questions, negations and percentages. On top of that many concepts are not automatically recognized and the user has to select in the form of an automatic drop-down, which appears when the user hovers over the word.

Amazon launched its AWS BI product known as QuickSight in 2015 and introduced its first natural language capabilities in September 2021 known as QuickSight Q to help simplify data analytics processes. As a full trial version was not available that allows the user to upload their own dataset or connect to a database, a like-for-like test could not be carried out and only a test using the available demo datasets setup by QuickSight Q was used. It became clear that just like the other tools QuickSight Q also struggled with comparison questions, negation words, averages or using words such as “best” in the context of sales and revenues.

There are a number of available solutions on the market when it comes to natural language queries. Most of them offer language as a side-feature only, while just a few of them were developed from the ground up with focus on a natural language interface. It is a very difficult problem to solve and most vendors choose to limit their solutions to a single table-view only or to restrict language to a technical grammar which doesn’t feel natural.

Natural language querying is one of those ideas that every 20 years reemerges, because it just feels like the right solution for self-service analytics. Yet, the maturity of the technology and the overall UX were always impediments for it to become mainstream. We believe that the time for it has come due to the technological progress in recent years. We have been working hard to make Veezoo the best self-service analytics solution when it comes to ease-of-use, as it was built from the ground up with this single objective in mind. In the end, if users don’t get the right answers from their questions or if they need to learn a new “language”, they inevitably go back to their standard reports and asking the data teams for the answer.

Natural language is ambiguous. It is vague. That’s why we built Veezoo to handle very smoothly its edge cases. Key for that is Veezoo’s dialog-based interface which offers the user the ability to clarify their intentions through an intuitive interaction with the system. It is not by chance that Veezoo users are amazed by how well it works and how easy it is to get started. It is due to our relentless focus on simplicity and making access to information as easy as just asking for it.

As companies notice that they spend vast amounts of time educating people on how to generate, find and request reports, they understand that having a self-service analytics solution like Veezoo reduces reporting requests and adds significant value to the organization and the quality of its decisions.

Sounds interesting? Start using Veezoo today for free and get answers from your data faster than you can say ‘natural language interfaces to databases’.

Page load link
We use cookies on our website to give you the most relevant experience by remembering your preferences and repeat visits. By clicking “Accept”, you consent to the use of ALL the cookies. Read More
Cookie settingsACCEPT
Manage consent

Performance cookies are used to understand and analyze the key performance indexes of the website which helps in delivering a better user experience for the visitors.

Analytical cookies are used to understand how visitors interact with the website. These cookies help provide information on metrics the number of visitors, bounce rate, traffic source, etc.

Advertisement cookies are used to provide visitors with relevant ads and marketing campaigns. These cookies track visitors across websites and collect information to provide customized ads.

Other uncategorized cookies are those that are being analyzed and have not been classified into a category as yet.

Save & Accept
Powered by